At this point, the below picture will do a better job describing what his foot looked like than my words. See pre-operative photos below of the left and right. (Click any pictures to enlarge and open in new window.) 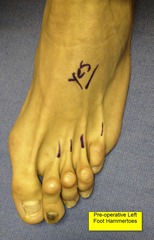 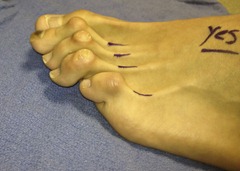 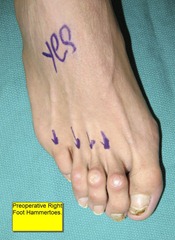 Before I tell you more about the surgery and show you before and after pictures of this hammertoe surgery, let me tell you one amazing thing. The day of the second surgery, six weeks to the day after the first surgery, my patient informed me that he was playing basketball and comfortable the very day before.

Of course, I had told him it would be 12 weeks before he could play so he was not really listening to me, but I was happy he was doing so well after his surgery to recover so quickly.

This surgery was a big one as far as hammertoe surgery goes and he needed it on both feet. It was big because he required release and lengthening of 8 metatarsal phalangeal joints, 8 toe joints, 6 screws and 2 pins.

Let’s start at the beginning. If you want to skip ahead, scroll down and check out the before and after pictures of hammertoe surgery at the end.

This patient came to me with a complaint of pain in both feet at the toes due to the contracted joints. He had pain with any activity and just walking. He had trouble fitting shoes. He also didn’t like how they looked, and was embarrassed.

I told him all about the surgery to correct hammertoes and the postoperative course.

In surgery, I first opened up the to the toe joints and cut with a saw across the toe bones to shorten the toe and reduce the contracture of the toe joints. I then removed the cartilage of the adjacent bones in order to allow the two bones to fuse together when they heal and form one bone. This is necessary to achieve a very stable straight toe so that hammertoes will not come back again in the future after surgery.

People are always concerned when I talk about fusing bones and joints together as to what the future function will be. I describe it like this: The joints at the ball of the foot still function up and down. These are the important motions when walking, running and performing all activity.

The toe joints do not need to move. The toes are against the floor when you’re walking and running, etc. such that they do not bend anyway. The tendons still function to hold he toe against the ground but not bend into the ground. So, fusing the toe joints to never move again does not affect most activities going forward. It would be difficult to grasp with the toes like picking something up, but that’s not a usual activity for most of us.

Going back to the hammertoe surgery procedure, after I cut the bone and remove the cartilage in order to get the bones to fuse together, I then need to put in hardware to hold the bones in the proper place and position. There are multiple choices of hardware.

The old way to fixate hammertoes in surgery was to use pins called k-wires. While I occasionally do use these, they are not my first choice usually. K-wires hold the bones together in only one plane from angulating. The bones can still move from proximal to distal (close to far) on the pin which we refer to with an analogy of ‘food on a shishkabob’. It can move along the metal pin. It can also rotate on the pin.

New advancements in surgical fixation use metallic implants that are inserted into the bones to more rigidly hold them in place. These implants usually screw into one bone and are force fitted into the adjacent bone with barb-like structures. This prevents the bones from moving and rotating. I often use these but they are very expensive and do not hold as well as screws do.

Often, my fixation of choice are screws. Screws are unique in that they cause compression of the two bones to be fused together in order to hold them tightly together. This also stops angulation, and all other motion. I have found the greatest success rate of achieving fusion using screws compared to any other fixation.

So, by this time in the surgery, I’ve prepared the bones to fuse and then need to insert the screws. The special screws are called cannulated screws. The have a ‘cannula’, or hole down the center. This allows me to insert a temporary metal wire into the bones to hold them straight and to make sure I like the position before permanently fixing them.

Once I put the pins in and confirm I like the positioning with real-time x-rays, the screw slides onto the wire with the hole down the center. I screw the bones together and then remove the temporary wire leaving just the screw holding the bones together. You can see the screws on x-ray in the post-operative photos below.

Depending on the size of the bones I use different diameters and lengths of screws. Believe it or not, it is hard to find screws that are long enough for fusing toe bones. The problem in the past was that companies made shorter screws of the thinner diameters that did not allow for fusion of toes. The reason for this is that when fusing larger bones, we use thicker screws. There was no need for long thin screws. Fortunately, I was able to work with one of the screw companies in order to design special screws for the purpose of fusing hammertoes. This company makes screws that are longer than any other company. (Thanks Perry). If any doctors reading this want the name of the screw company, feel free to email me and I’ll let you know how to get these screws.

On the little toes, fifth digits, the bones are too small to safely insert screws without risk of fracturing the toes usually. For this reason, I usually do not use screws in the small bones but opt for k-wire fixation. I also do not fuse these bones but rather just take out part of the joint to shorten and straighten the toe. On some smaller patients this applies to the other toes too, not just the fifth toe.

Once the screws and pins are in and the toes are straight, I next address the base of the toe joint that is dislocated. I make another incision further back to access the next joint back. This is called the metatarsal phalangeal joint.

I lengthen the tendon that moves the toe up called the extensor digitorum longus tendon. This is an important step as this tendon has become permanently shortened over time, and that holds the toe upwards. I use a procedure called a Z-lengthening because the incision through the tendon is shaped like the letter Z. This allows the tendon to still function in a longer position after the toe is brought down. Next I go deeper to the joint capsule and perform a lengthening and release to bring the toe down from it’s upwardly contracted position.

At this time the toe is straight and the contractures are lengthened. The toe is shorter and in a perfect position. This is a really rewarding surgery for me. I take a severely deformed toe and turn it into a better looking and better functioning toe.

It took me just over two hours to do each foot, 4 toes including lots of plastic surgery maneuvers of the skin.

Most doctors would stop with straight toes but I have additional training in plastic surgery skin plasty procedures that I have written about on my blog before.

Imagine what happens when you shorten the bones drastically of these hammertoes. There is lots and lots of redundant skin and soft tissues left over. A big part of this surgery is obtaining a nice cosmetic outcome, as well as reducing pain and improving shoe fit.

In order to obtain a cosmetic foot surgery outcome, I spend a great deal of time working on the soft tissues, skin and suturing technique. First I shorten all the tendons and joint capsules that are redundant after the bones are shortened and suture them.

Even with all this plastic surgery type procedures, occasionally patients end up with small areas of excess skin postoperatively after the scar tissue forms. For this reason, I always inform patients that I can perform additional surgery nine to twelve months later, or more, to remove the excess skin in an additional surgery.

Ok, so to summarize: I’ve removed and shortened the bones. I’ve straightened the toes. I’ve permanently fused the bones with screws holding them together. I’ve reduced the soft tissue contractures at the further back joints. I’ve shorted the tendons and joint capsules. I’ve done plastic surgery skin plasty procedures for a cosmetic outcome and I’ve sutured everything with cosmetic surgery techniques.

You can see the drastic reduction of the hammertoes in the before and after photos. I always call my patients the next day after surgery. After both of these surgeries, I had expected this patient to have some post procedure pain, but was very surprised both times when he told me he had virtually no pain and took only one or two Vicodin.

As usual, thanks for reading and please submit comments and questions. Although I’m behind in answering them, I’ll eventually get to them all.

Before and after pictures of hammertoe surgery are below:

Side-by-side before and after hammertoe surgery: